This page is intended to show you every little secret that the community has found about the game. That means it has pretty major SPOILERS for the published part of the game and even hints of yet unreleased events. If you do not wish to sacrifice the plot twists in the game, this page is not for you. But that is up to you. If you're still here, have fun!

If you want to know when you can get a specific piece of equipment or a weapon, your best bet is to use the Find function of your browser and introduce the name. If you don't find it, and you think that it should be here, let us know in the comments section.

If you know any other secret not listed here, please share with the community by leaving a comment or (better yet) editing this page. 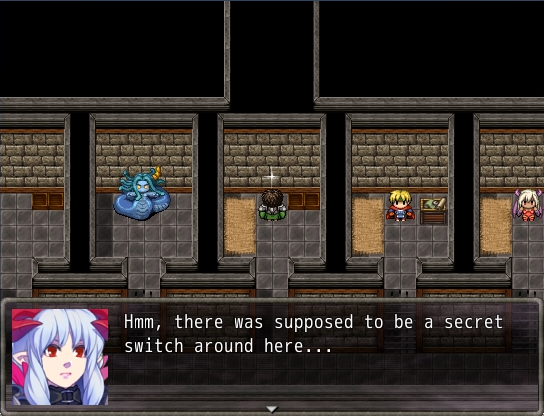 That is you, inquisitive player!

Some monsters have regenerated (2 of them!). The fortress had been abandoned in all cases.

Fifth Visit (After the war)

Stineford is visited at various points: in Chapter 1, early part of Chapter 2 and you can visit freely during chapter 4.

In Chapter 1, there are various things that you could do in the Slums to get just a bit of EXP, cash or ProN:

A shining sword is shining near a dead end (you can barely see it) and a Mage's Pin is on a corpse near the exit. There's also a sexy lingerie set in a chest.

If you play smartly and get at least 60,000 ProN (sell the potions, get Orcent a girl and so on), you get a unique response from Megail:

With all the investments, there seem to be few secrets here.

During the Coup[edit | edit source]

You find an interesting Barrier's Pin on a corpse in the palace.

After the Coup[edit | edit source]

The special powers that Trin shows during the Coup have intrigued Simon, so ask Robin to investigate them for some relationship points with Robin and Trin later.

The clothes and the potions shops are the only shops where your gear can be sold in Ari-Yhilina.

Rick and her mom are waiting at the cathedral. They will be involved in a quest later.

After the Invasion[edit | edit source]

After the war[edit | edit source]

After the Council of Gawnfall[edit | edit source]

The Horde Orcs (and only these) drop steel weapons rarely depending on the weapon they're holding[15]:

Once Nalili has joined the party, leave the Palace and get access to this area:

So to get the best price you need to have invested in Eustrin Embassy back in Aram.

You get the following stuff from this section: a Steel Shield, a Steel Sword, and a Thug's Orb outside of the prison. Inside, if you check the bones from Dari's cell, you find some Health Potions and some money.

The elf bonuses apply only if you finish the task after you've chosen an ally.

There are some hidden treasures here:

In the room with six statues near the bottom right of the map, interact with the back of the second statue, right side. You get 3500+7100 Sx.

In the B2 floor, there is a room with many pillars. Check first the top right pillar and then the second pillar (counting from left to right) from the bottom row. Interact with it and you are able to go upstairs to the room with no doors. In the chest, you find an Ancient Glove.

Reference to Shining Sword #18... look below to see how to get it.

Ordeal of the Claw[edit | edit source]

Use the levers to open the rooms. Inside the many blue chests, you find:

A key can also be found in the northern room. It opens the locked door which gives access to a Divine Claw Charm.

After the War[edit | edit source]

The alliance process is interrupted by terrible news: there has been a succubus raid on the Aram-Yhilin border. The exact state of the border when Simon's party arrives is determined by previous preparations and is used to build up a hidden border score.

The NPCs have different comments based on the state of the border (and your orcs), and the civilians in the Northwest offer rewards if the border incident isn't a total disaster:

Chapter 4 (After the war)

There are two quests in this country that, so far, are not in the Quest Journal.

Once Orcent rejoins the group in Chapter 4, you can see various conversations between him and Simon (in most cases) when they visit bars around the world. Some of the conversations won't be available until later or in function of your investments, though: 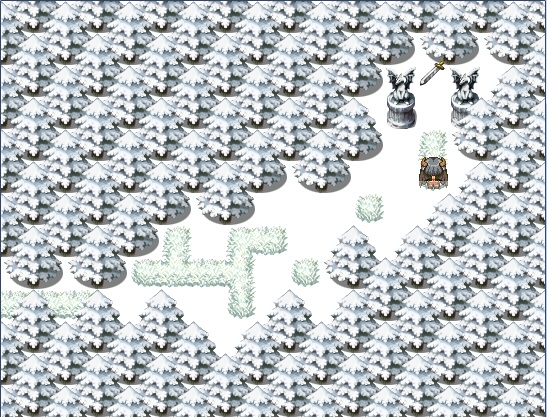 Yarra, do you think is that easy to pick that sword? It's not the basement of a warehouse...

The Shining Swords are a rare collectible item (Sierra has stated that they are a finite number of them), so you should get as many as you can. Also, we know that it's interesting to have Shining Armors. It's unknown at the moment if there is any point in collecting other Shining gear (Sceptre, Robes) but seeing that you can't sell it...

As of version 0.44.X, there is a maximum number of twenty-nine swords. Here are the locations in chronological order:

Another item the party seems to be collecting is intelligent or otherwise exceptional orcs:

Acquiring the first three has varying effects on your army's performance against the horde in Chapter 2[41] and the invasion of Yhilin in Chapter 3. Later during the Third Arclent War, you have the chance to use them (except Stark) as party members.

You also gather "seed orcs" in Ari-Yhilina as part of a quest. These seem interchangeable for breeding stats, but having more increases your army size.

Strange items dropped by powerful inhabitants of the Tower. They will help form a basis for Wendis's new body, presumably the more the better.

The Incubus King items are un-equippable pieces of gear from an ancient, forgotten Incubus King. So far, one can be obtained per chapter. How many of these you have collected has an impact during the Erosian War and very likely at the end of the game.

Retrieved from "https://thelastsovereign.miraheze.org/w/index.php?title=Secrets_and_collectibles&oldid=33989"
Category:
Cookies help us deliver our services. By using our services, you agree to our use of cookies.