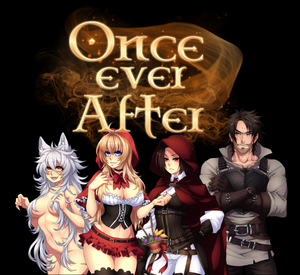 Once Ever After was one of Sierra's side projects. It is a collaboration with Crescentia who is the main artist for the project. There is a walkthrough.

Everyone knows how the story goes: innocent, 18-year-old Red Riding Hood goes into the woods and is corrupted by the naughty, naughty Big Bad Wolf. Ingrid is the newest Little Red Riding Hood: she doesn't know what awaits her in the dark woods, but she knows that it seems exciting.

But Ingrid's world is only one of an infinite number of Tales, and those stories are starting to bleed over into one another. War is coming, and Ingrid doesn't even know what war is. Nothing will ever be the same, and the only weapon Ingrid has to face the changes is sexy fun.

The game takes place in a highly unusual setting: an infinite series of small pocket dimensions, each based around a fairy tale. There are many different types of dimensions, some cycling through the story before repeating while others go off the rails. The fundamental rules of reality change between dimensions... in some it is literally impossible to hurt another person and in others all of life is brutal and violent. Ordinarily people remain stuck in their home dimension but when they move between dimensions things get crazy.

It becomes harder to move between dimensions the larger the shift in scope. Individuals with magical items regularly move between established gates between Tales but moving between Fables is difficult. Some Tales are more "essential" than others and form the spine of a given region but there are implied to be infinite variations in between those.

Characters in this setting have roles baked into their fundamental essence. A character is called a capital-w Wolf if they take on the "big bad wolf" role in Little Red Riding Hood but they could be a person with wolf-like characteristics, an actual animal, or a humanoid wolf-like creature. A "Girl" could be any age so long as they fulfill that role. Their essence also relates to their function in their home dimension: Ingrid carries sexuality with her while Wilhelm's nature is tragic.

Other Fables have other archetypes. Many other fairy tale tropes are mentioned such as fairy godmothers, groups of three brothers, or ignored beggars. We know that the Beauty and the Beast Fable is apparently somewhat close to Little Red Riding Hood. People in the Girl role will be pressured into the Beauty role if they travel there and there is a similarity between the archetypes of Wolf and Beast.

Retrieved from "https://thelastsovereign.miraheze.org/w/index.php?title=Once_Ever_After&oldid=36377"
Categories:
Cookies help us deliver our services. By using our services, you agree to our use of cookies.