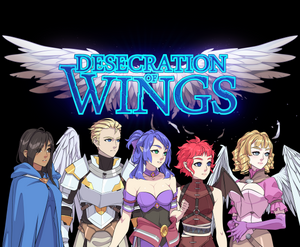 Desecration of Wings is one of Sierra's side projects. It is more of an old school JRPG and Sierra stated it was one of her oldest projects, only recently rewritten and finished. There is a walkthrough and a secrets page on the wiki.

The Endless Court is eternal, ruled by Immortals who have guided the four races of the world since the dawn of time. But they seem very concerned with preventing anyone from studying the broken ruins that litter the world, and peace is more fragile than it seems.

Felana is one of the historians at the margins of society, oppressed by the anti-scholarship edicts of the Endless Court. All she wants is to take care of her daughter and study in peace... but as war brews among Immortals and her knowledge suddenly becomes troublingly relevant, she isn't going to have that option.

The game takes place on a world with a single unnamed continent, dominated by an Empire formed from several conquered nations. There is information that more once existed, but it has been destroyed by the time the game takes place.

The Empire is populated by four different races:

All four groups appear to be the same species, because they can have fertile children, but half-breeds are rare due to the racial tensions.

Retrieved from "https://thelastsovereign.miraheze.org/w/index.php?title=Desecration_of_Wings&oldid=18433"
Categories:
Cookies help us deliver our services. By using our services, you agree to our use of cookies.